The Rime of the Ancient Mariner – Part the Second 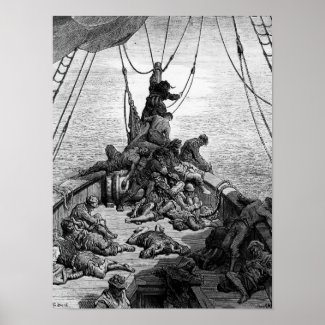 The Sun now rose upon the right:
Out of the sea came he,
Still hid in mist, and on the left
Went down into the sea.

And the good south wind still blew behind
But no sweet bird did follow,
Nor any day for food or play
Came to the mariners’ hollo!

Nor dim nor red, like God’s own head,
The glorious Sun uprist:
Then all averred, I had killed the bird
That brought the fog and mist.
‘Twas right, said they, such birds to slay,
That bring the fog and mist.

The fair breeze blew, the white foam flew,
The furrow followed free:
We were the first that ever burst
Into that silent sea.

Down dropt the breeze, the sails dropt down,
‘Twas sad as sad could be;
And we did speak only to break
The silence of the sea!

All in a hot and copper sky,
The bloody Sun, at noon,
Right up above the mast did stand,
No bigger than the Moon.

The very deep did rot: O Christ!
That ever this should be!
Yea, slimy things did crawl with legs
Upon the slimy sea.

About, about, in reel and rout
The death-fires danced at night;
The water, like a witch’s oils,
Burnt green, and blue and white.

And some in dreams assured were
Of the spirit that plagued us so:
Nine fathom deep he had followed us
From the land of mist and snow.

And every tongue, through utter drought,
Was withered at the root;
We could not speak, no more than if
We had been choked with soot.

Ah! well a-day! what evil looks
Had I from old and young!
Instead of the cross, the Albatross
About my neck was hung.

Under a spreading chestnut tree, the village smithy stands