The Rime of the Ancient Mariner – Part the Fourth

Read by David Barnes for Librivox 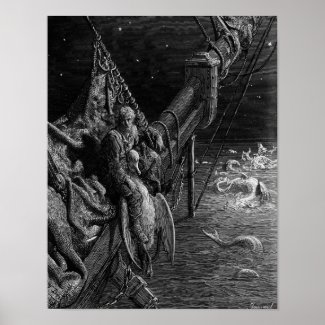 “I fear thee, ancient Mariner!
I fear thy skinny hand!
And thou art long, and lank, and brown,
As is the ribbed sea-sand.

“I fear thee and thy glittering eye,
And thy skinny hand, so brown.”—
Fear not, fear not, thou Wedding-Guest!
This body dropt not down.

Alone, alone, all, all alone,
Alone on a wide wide sea!
And never a saint took pity on
My soul in agony.

The many men, so beautiful!
And they all dead did lie:
And a thousand thousand slimy things
Lived on; and so did I.

I looked to Heaven, and tried to pray:
But or ever a prayer had gusht,
A wicked whisper came, and made
my heart as dry as dust.

I closed my lids, and kept them close,
And the balls like pulses beat;
For the sky and the sea, and the sea and the sky
Lay like a load on my weary eye,
And the dead were at my feet.

The cold sweat melted from their limbs,
Nor rot nor reek did they:
The look with which they looked on me
Had never passed away.

An orphan’s curse would drag to Hell
A spirit from on high;
But oh! more horrible than that
Is a curse in a dead man’s eye!
Seven days, seven nights, I saw that curse,
And yet I could not die.

The moving Moon went up the sky,
And no where did abide:
Softly she was going up,
And a star or two beside.

Her beams bemocked the sultry main,
Like April hoar-frost spread;
But where the ship’s huge shadow lay,
The charmed water burnt alway
A still and awful red.

Beyond the shadow of the ship,
I watched the water-snakes:
They moved in tracks of shining white,
And when they reared, the elfish light
Fell off in hoary flakes.

Within the shadow of the ship
I watched their rich attire:
Blue, glossy green, and velvet black,
They coiled and swam; and every track
Was a flash of golden fire.

The self same moment I could pray;
And from my neck so free
The Albatross fell off, and sank
Like lead into the sea.

About suffering they were never wrong, the old Masters