Perceiving the Poet as a Prophet

“The Prophet” (by Aleksandr Pushkin) suggests to the reader a supernatural experience by the narrator where he is transformed and sent out into the world by God himself.

It may be reminiscent of the Old Testament to some since six winged seraphs appear to ISAIAH, but what of the snake and the forked tongue? Perhaps he was expressing his distrust of zealousness. Some people may perceive him to be speaking of himself as well.

Perceiving the poet as a prophet is not unheard of in Russia and, in fact, author Fyodor Doestovesky often recited this poem in public, allowing people to think of him as a prophet.

Mrs. Ivan Pavlov heard him read Pushkin’s “The Prophet” in 1879 and later described the experience:

“I saw the Prophet Dostoyevsky, his face transformed. His eyes flashed lightning that seared people’s hearts, his face glowed with mighty inspiration from on high” (Hingley 184). 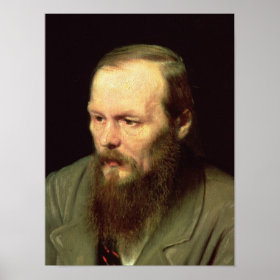 The literary historian Semyon Vengerov, who was present at the same or a similar reading of Pushkin, was likewise impressed:

“Dostoevsky looked like a prophet in the full meaning of the word. . . . From the moment he mounted the podium all his listeners were completely in the hypnotic power of this thin and inconspicuous man. Each person in the auditorium was spellbound by this penetrating, strangely burning gaze that stared far out into an indeterminate remoteness” (Kjetsaa 315).

Another listener, saying his performance could not really be called reading or acting, labeled it “life itself; a sick, epileptic fever fantasy” (Kjetsaa 316).

Grossman reports that Dostoevsky “read with highly original inflections and in inspired tones,” and “he attached a great deal of importance to poetic melody and conveyed the musicality and rhythm of the language splendidly” (566).

His wife accompanied him on these occasions, carrying his text, cough drops, a handkerchief, and a scarf for his neck after he completed his performance (Hingley 184).

We use cookies on our website to give you the most relevant experience by remembering your preferences and repeat visits. By clicking “Accept All”, you consent to the use of ALL the cookies. However, you may visit "Cookie Settings" to provide a controlled consent.
Cookie SettingsAccept All
Manage consent

This website uses cookies to improve your experience while you navigate through the website. Out of these, the cookies that are categorized as necessary are stored on your browser as they are essential for the working of basic functionalities of the website. We also use third-party cookies that help us analyze and understand how you use this website. These cookies will be stored in your browser only with your consent. You also have the option to opt-out of these cookies. But opting out of some of these cookies may affect your browsing experience.
Necessary Always Enabled
Necessary cookies are absolutely essential for the website to function properly. These cookies ensure basic functionalities and security features of the website, anonymously.
Functional
Functional cookies help to perform certain functionalities like sharing the content of the website on social media platforms, collect feedbacks, and other third-party features.
Performance
Performance cookies are used to understand and analyze the key performance indexes of the website which helps in delivering a better user experience for the visitors.
Analytics
Analytical cookies are used to understand how visitors interact with the website. These cookies help provide information on metrics the number of visitors, bounce rate, traffic source, etc.
Advertisement
Advertisement cookies are used to provide visitors with relevant ads and marketing campaigns. These cookies track visitors across websites and collect information to provide customized ads.
Others
Other uncategorized cookies are those that are being analyzed and have not been classified into a category as yet.
SAVE & ACCEPT
Powered by